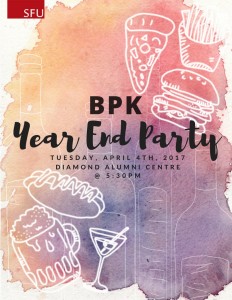 The Year End Party’s pretty much what you’d expect it to be: a party to end the year. This occasionally presents confusion for some, since SFU has a full summer term and thus it doesn’t really seem like the year has an end. Well it does, and it’s in April. Just go with it.

This event has been many things over the years, from glamorous balls to casual dinners, but the one thing it’s always been, regardless, is a good time. It’s not very often you’ll have the chance to sit down with your profs for a meal and find out that they are, in fact, real people. I know. It’s a weird thought, but they are.

In order to keep the event as affordable for students as possible, the costs are heavily subsidized by the BPKSA. We accomplish this through financial support from the SFSS, and through the profits yielded from the BPK clothing sales. In past years, the meal has cost approximately $25 per person, but we have sold tickets for $15 each. We’re basically paying you $10 to have dinner with us, if you think about it. In addition, we have some awesome draw prizes to give away! That’s a pretty good deal any way you look at it!

Tickets for this event sell out, so make sure you get them early! I feel like a jerk when I tell someone that they can’t come to the event because we physically do not have anywhere left for them to sit. Don’t wait!